U.N. experts urge the kingdom to release Abdullah al-Howaiti and “abolish the imposition of the death penalty for children for all crimes.” 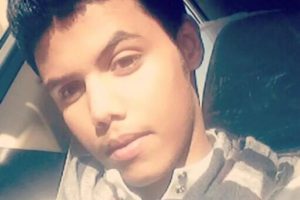 Following reports that U.S. President Joe Biden may visit Saudi Arabia during his trip to the Middle East next month, a human rights group on Monday highlighted global calls to release Abdullah al-Howaiti, a young man twice sentenced to death by the country’s courts.

Reprieve pointed out in a statement that United Nations experts have urged the Saudi government to annul his sentence “because he did not receive a fair trial, as credible reports that he was tortured into making a false confession when he was 14 years old were not investigated.”

Sharing the statement on Twitter, the group noted that the U.S. leader is considering a trip to Saudi Arabia and encouraged Biden to review what a trio of U.N. experts has recently said in response to the case.

Arrested and tortured at 14
Sentenced to death at 17
At risk of “arbitrary execution”@JoeBiden @POTUS, before you visit #SaudiArabia 🇸🇦 read what UN legal experts say about Abdullah al Howaiti 👇🏼 https://t.co/Rx71pdYfnE

“From the moment police raided the Howaiti family home and dragged out 14-year-old Abdullah, the Saudi justice system has been on autopilot, punishing him for a crime he cannot have committed,” said Jeed Basyouni, who leads Reprieve’s work on the death penalty across the Middle East and North Africa.

“Every court knew how young he was,” she continued. “Every court heard he had an alibi. Every court was told he was tortured. But they sent him to death row and kept him in a cell, when he should have been playing football with his friends.”

“Abdullah will never get back the teenage years he spent fearing for his life, but it’s not too late for the Saudi courts to do the right thing,” Basyouni added. “The world is watching.”

Human Rights Watch (HRW) explained last year that “while Saudi authorities announced an end to the death penalty for children for certain crimes in 2018 and applied this retroactively to previous cases in 2020, the death penalty remains a possible punishment for the type of crime Abdullah al-Howaiti is accused of committing.” He is accused of murdering a police officer during a robbery of a jewelry store in Duba.

“Al-Huwaiti’s court proceedings flouted almost every internationally recognizable fair trial guarantee, and yet a Saudi court still sentenced him to die for a crime allegedly committed when he was 14,” said Michael Page, HRW’s deputy Middle East director, at the time. “In sentencing a child to die while ignoring torture allegations, the Saudi court made a mockery of the country’s alleged ‘reforms.'”

Referencing al-Howaiti’s plea of not guilty and his written account from January 22, 2019, HRW outlined:

Al-Howaiti said in the letter and to the court that interrogators subjected him to torture and ill treatment to force him to confess. He said they made him stand for hours at a time, beat him and slapped him on the face, flogged him with an electric cable on the soles of his feet and various parts of his body until he lost consciousness, forced him to hold his brother’s legs while he was being beaten, and lied that his mother and sisters were also in detention and would only be released once he confessed.

There, he said, an interrogator threatened to pull out his nails, suspend him from one hand, and torture him in ways he “could not begin to imagine,” prompting al-Howaiti to promise him he would not tell anyone else about his ill treatment.

In March, the U.N. experts—Nils Melzer, special rapporteur on torture and other cruel, inhuman, or degrading treatment or punishment; Miriam Estrada-Castillo, vice-chair of the Working Group on Arbitrary Detention; and Morris Tidball-Binz, special rapporteur on extrajudicial, summary, or arbitrary executions—sent their letter to Saudi leadership that Reprieve elevated.

After outlining the allegation about al-Howaiti’s treatment since his arrest in 2017, the experts’ letter states that “while we do not wish to prejudge the accuracy of the information received, we are deeply concerned by the continuing imposition and execution of the death penalty against persons who were below 18 years of age at the time of committing the crime, which amounts to a serious violation of international human rights law.”

Along with reminding the kingdom of its obligations under international law, the letter calls on the government not only “to annul the death sentence imposed on Mr. al-Howaiti,” but also “to promptly and thoroughly investigate the allegations of torture, and to ensure that he is re-tried in conformity with international norms and standards.”

The letter further calls on the Saudi government “to adopt without delay the necessary legislative measures to abolish the imposition of the death penalty for children for all crimes” as well as “to consider establishing an official moratorium on all executions as a first step towards fully abolishing the death penalty in the country.”

Meanwhile, in the United States, though Biden’s administration suspended federal executions following what critics called a “killing spree” under his predecessor, death row inmates are still being executed at the state level—conditions that fall short of the president’s campaign promise to “work to pass legislation to eliminate the death penalty at the federal level, and incentivize states to follow the federal government’s example.”