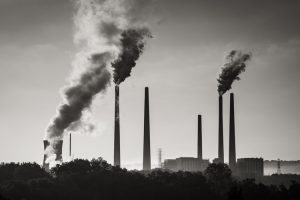 If the court’s right-wing supermajority sides with GOP attorneys general over the EPA in this case, it could strip the federal agency of its authority to limit planet-heating pollution from power plants—and a sweeping ruling from the justices could go even further.

“The immediate issue is the limits of the EPA’s ability to regulate greenhouse gases. The broader issue is the ability of federal agencies to regulate anything at all,” explained physicist Robert Rohde, lead scientist at the nonprofit Berkeley Earth, in a series of tweets Monday.

“Conservatives have long wanted to reduce the ability of the federal agencies to impose regulations, and this case provides the Supreme Court a chance to do that,” he added. “If they do, it could have far-reaching and long-lasting consequences.”

After the Supreme Court issues its ruling in West Virginia vs EPA this week it’s gonna take people like three years to begin to grasp how catastrophic the decision is not only for clean air & climate but for … everything. Workplace safety protections, for example.

U.S. Sen. Jeff Merkley (D-Ore.) similarly warned earlier this month of a ruling that “would gut the EPA’s authority to combat climate chaos—it could let corporations harm our health and the environment without consequences.”

“This could be the latest in a long line of dangerous decisions pushed by extremist justices to let corporations exploit their workers, their customers, and our shared future to get even richer,” he said.

Policy researcher Will Stancil on Sunday also tied the looming decision to the current justices’ track record, anticipating a ruling that sides with the Republican AGs to some degree.

“The Supreme Court’s legacy this term: forcing women to bear children, forcing families to raise those children in a society awash in guns, and forcing those children to grow up in a world of runaway climate change,” Stancil said.

“What an utterly villainous institution,” he continued, “unleashing untold suffering on future generations, for no good reason other than pursue their own poisonous social resentments.”

The case West Virginia v EPA challenges if EPA can regulate planet-warming pollution from power plants without express authorization from Congress. Depending on how broad the Supreme Court’s decision is, it could have detrimental impacts on more than environmental protection.🧵 pic.twitter.com/LhMcceSROM

Concerns about the case have mounted since the court agreed to hear it last October. When oral arguments began in March, Jason Rylander, an attorney at the Center for Biological Diversity’s Climate Law Institute, said that if the justices block the EPA from addressing “deadly” pollution, then President Joe Biden “must lead the way on court reform to halt this power grab.”

The high court’s recent rulings—particularly on reproductive freedom and gun control—are already driving fresh demands for Democrats in Congress and Biden to swiftly expand the court.

Polling released last week by Data for Progress and Evergreen Action suggests a decision antagonistic toward climate action and environmental protections would further fuel calls to add more justices, given that majorities of Democratic, Independent, and Republican voters are somewhat or very concerned about the impact of air and water pollution on their communities.

A majority of respondents also said they are somewhat or very concerned about the Supreme Court removing environmental protections established under the Clean Air Act—a provision of which is the focus of the case. A majority of voters further believe the EPA should “be allowed to regulate air pollution that contributes to climate change.”

Georgetown University law professor William Buzbee told The Hill Saturday that if the justices take away the EPA’s ability to limit emissions, “that will be a major loss of climate progress and it also will be a major reason to further distrust the Supreme Court as a highly political Supreme Court that’s more about power and less about law.”

This case isn’t just significant for the impact it could have on the federal government’s efforts to battle the climate emergency. As The New York Times reported earlier this month:

West Virginia v. EPA, No. 20–1530 on the court docket, is also notable for the tangle of connections between the plaintiffs and the Supreme Court justices who will decide their case. The Republican plaintiffs share many of the same donors behind efforts to nominate and confirm five of the Republicans on the bench—John G. Roberts, Samuel A. Alito Jr., Neil M. Gorsuch, Brett M. Kavanaugh, and Amy Coney Barrett.

“It’s a pincer move,” said Lisa Graves, executive director of the progressive watchdog group True North Research and a former senior Justice Department official. “They are teeing up the attorneys to bring the litigation before the same judges that they handpicked.”

The pattern is repeated in other climate cases filed by the Republican attorneys general and now advancing through the lower courts: The plaintiffs are supported by the same network of conservative donors who helped former President Donald J. Trump place more than 200 federal judges, many now in position to rule on the climate cases in the coming year.

If the federal judiciary delivers wins to right-wing plaintiffs in these pending cases, the Times added, it will lead to limits on climate action by a country that “has pumped more planet-warming gases into the atmosphere than any other nation,” and “would quite likely doom the world’s goal of cutting enough emissions to keep the planet from heating up more than an average of 1.5°C compared with the preindustrial age.”

The partisan and anti-science “supreme court” will likely rule on Monday against the EPA’s ability to regulate climate emissions, effectively shutting down the last best avenue for climate action by the US. The ramifications could last thousands of years.

As she put it last week: “If the Supreme Court limits the EPA’s authority to regulate pollutants like carbon dioxide, the public health and environmental consequences would be profoundly damaging to human health, the planet, and future generations.”