It’s difficult to take shelter during a thermonuclear attack, says ICAN, “when, in a matter of seconds, houses up to 175 kilometers away from the epicenter crumble like they are made of cards.” 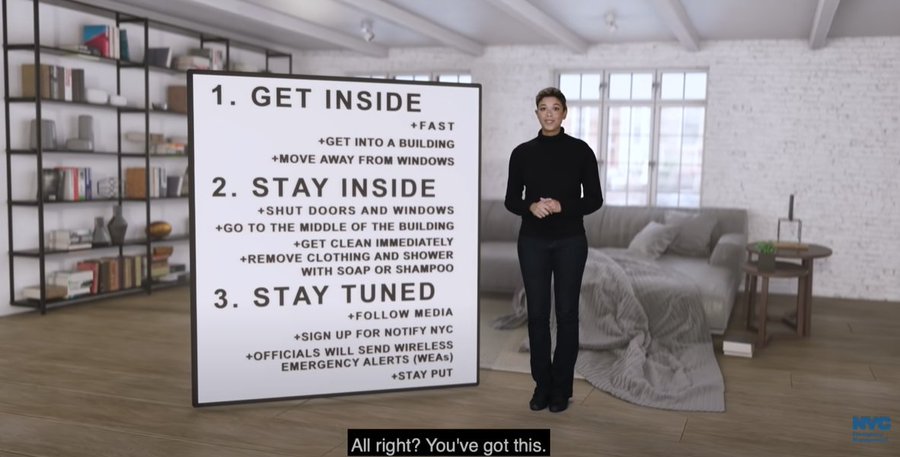 Peace advocates on Tuesday derided a New York City public service announcement meant to prepare residents for a nuclear attack as a 21st-century version of the absurd Duck and Cover civil defense film of the early Cold War era.

“So, there’s been a nuclear attack,” the narrator of the NYC Emergency Management video begins. “Don’t ask me how or why, just know the big one has hit.”

“So what do we do?” she continues before instructing viewers to “get inside, fast,” “stay inside… and get clean immediately,” and “stay tuned; follow media for more information.”

“All right? You’ve got this,” the woman assures viewers.

Is this for real??? The Onion crowd? Hard to believe the City of NY would produce this!

While New York City Mayor Eric Adams called the PSA a “great idea,” some critics accused officials of unwarranted fearmongering amid increased nuclear tensions with Russia over its invasion of Ukraine and NATO’s response.

Others lambasted the PSA as latest in a line of nuclear war informationals like the U.S. Civil Defense Administration’s Duck and Cover and the British government’s Protect and Survive films that offer little more than delusive contentment for millions of people who likely would not survive a full-scale thermonuclear attack.

“The reality is, if this comes to pass, you don’t ‘got this,'” tweeted the International Campaign to Ban Nuclear Weapons (ICAN), which was awarded the 2017 Nobel Peace Prize for its work leading to a landmark treaty outlawing nukes.

Calling the PSA “outrageously misguided,” ICAN said it’s difficult to get inside fast during a nuclear explosion “when, in a matter of seconds, houses up to 175 kilometers away from the epicenter crumble like they are made of cards.”

🧵1/@nycemergencymgt just released a video advising New Yorkers of steps to follow in the event of a nuclear attack. “You’ve got this”, they say. Reminiscent of Cold War era “duck and cover” PSAs, it’s outrageously misguided! #nuclearbanhttps://t.co/qQMzb9aXVQ pic.twitter.com/43qtOoLiEy

“The PSA goes on to advise to ‘stay inside, remove clothing, and shower,'” ICAN added. “As if taking a shower will be feasible during a nuclear attack, or effective to protect you against radioactive ash. And ‘stay tuned’—as if communications infrastructure will be functional.”

The United States and Russia have over 11,000 nuclear warheads in their combined arsenals. China, France, and Britain have hundreds of warheads each, while India, Pakistan, Israel, and North Korea each have between 50-165 nukes.

According to NukeMap, a single Russian 800 kiloton warhead airburst over midtown Manhattan would destroy or severely damage much of New York City and cause an estimated 4.5 million casualties.

A higher-yield weapon, like the five-megaton warheads atop China’s Dong Feng-5 intercontinental ballistic missiles, would destroy most of the city while killing or wounding around eight million people. In an actual full-scale nuclear war, multiple warheads would likely be launched against a target as important as New York.

Millions of people not instantly incinerated or obliterated by the fireball—which is hotter than the sun’s core—and immense blast wave of a nuclear explosion would suffer severe burns, blinding, lacerations, blunt-force injuries, and, for many, the slow death of radiation poisoning.