“If another wave of job losses does indeed hit, the unemployment safety net isn’t ready to cushion the blow without significant improvements,” warns the co-author of a new study. 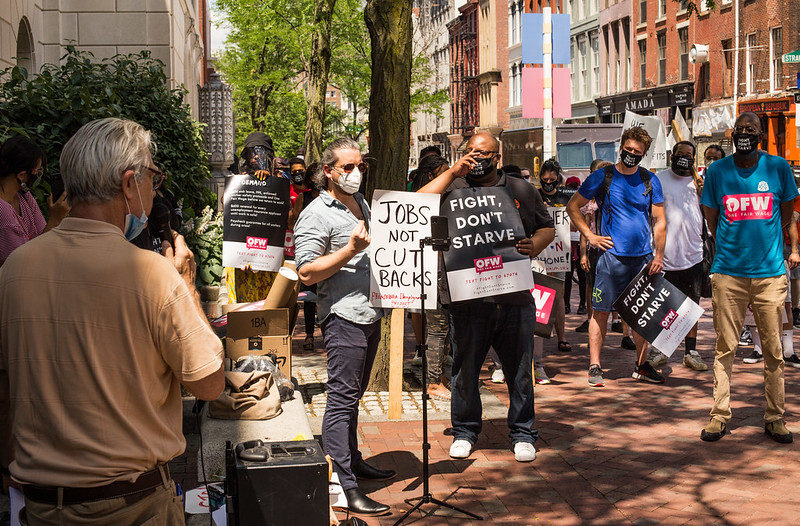 With the Federal Reserve poised to induce mass layoffs in its ongoing campaign to curb inflation, a study published Tuesday warns the notoriously fragmented U.S. unemployment system is nowhere near ready to handle another surge in jobless claims, potentially spelling disaster for the millions of people who could be thrown out of work next year.

Authored by Andrew Stettner and Laura Valle Gutierrez of The Century Foundation (TCF), the new analysis notes that “the share of jobless workers actually receiving UI benefits has shrunk dramatically” since federal benefit increases expired last year. According to TCF, just 26.8% of jobless workers were receiving state unemployment benefits in the 12 months that ended in August 2022, a sharp decline from the 76% rate through early 2021.

“Furthermore, UI benefits are not going as far as they used to,” Stettner and Gutierrez observe. “In the first quarter of 2022, the average weekly UI benefit payment of $347.22 only replaced 39% of the average wages that had been earned each week ($883.43) by those accessing benefits. A year earlier, the combined payout from state benefits and the $300 per week Federal Pandemic Unemployment Compensation program totaled $617.36, which means federal and state UI benefits at that time equaled 79% of pre-layoff wages.”

The U.S. unemployment system is overseen by the Labor Department but run by states, resulting in a wide variance in benefit size and duration—differences spotlighted by TCF’s newly updated Unemployment Insurance Data Dashboard. Cracks in the system were exposed in a major way during the early stages of the coronavirus pandemic, which resulted in a rapid spike in job losses and a resulting jump in unemployment claims, overwhelming states plagued by inadequate staffing, funding shortfalls, and outdated technology.

While the sizeable federal benefit boost enacted in 2020 helped many unemployed workers cope—and kept millions out of poverty—the enhanced UI program expired in 2021, and Congress didn’t pass legislation to permanently modernize the system in preparation for another labor market downturn.

Such a downturn may be coming soon, despite being entirely avoidable. On Tuesday and Wednesday, Federal Reserve officials will meet and likely impose another large interest rate increase aimed at further slowing economic demand—and, as a result, hiring—even as experts say the central bank’s chosen approach will harm workers without tackling the true drivers of price hikes, such as corporate profiteering and supply chain snags.

The Fed’s own projections indicate that its policy moves—which have spurred growing backlash from economists and progressive lawmakers—could cause the unemployment rate to rise to 4.4% by the end of 2023, which translates to around 1.5 million more Americans out of a job.

Bank of America has suggested the Fed’s estimate understates the likely damage by close to 2 million workers.

“At a time of growing economic uncertainty, one thing is clear: the nation’s system of unemployment benefits is inadequate and inequitable even during good times, let alone being wholly unprepared for another downturn,” said Stettner, TCF’s director of workforce development. “This new data reveals just how threadbare the baseline of support available through state unemployment programs has become, following the expiration of federal pandemic programs.”

“If another wave of job losses does indeed hit,” Stettner added, “the unemployment safety net isn’t ready to cushion the blow without significant improvements.”

Though the labor market has remained strong despite the Fed’s aggressive rate hikes throughout the year and explicit willingness to cause a recession, unemployment claims have ticked up in recent weeks and economists fear the central bank has already overshot as tighter financial conditions take their toll on the housing market and other major components of the U.S. economy.

To prepare for a potentially far-reaching wave of layoffs, Stettner and Gutierrez argue the Biden administration must make “effective use of the $2 billion allocated by Congress to the U.S. Department of Labor in the American Rescue Plan dedicated to equity, timeliness, and accuracy of payments, and should continue with a larger federal role in overseeing the programs as contemplated in the Guaranteeing Unemployment Assistance and Reducing Deception (GUARD) Act and President Biden’s FY 2023 budget proposals.”

“The federal response to the Covid-19 jobless crisis was a huge success—swift, historic action that kept food on the table for millions and helped get our economy back on track,” Gutierrez said in a statement. “But it shouldn’t be lost on us that such action was needed because our unemployment system is broken in the first place.”

“Now is the time to heed the lessons of the pandemic,” Gutierrez added, “and make improvements to states’ jobless safety nets before, not when, distress comes to the labor market.”