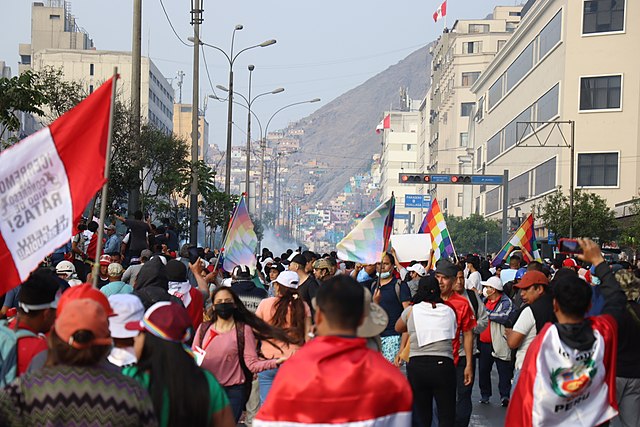 The Peruvian Health Ministry published the names and ages of 17 victims of what’s being called the Juliaca massacre, which took place in the Indigenous Aymara city of Juliaca, the capital of San Román province in the Puno region of southeastern Peru near Lake Titicaca and the Bolivian border. The youngest of the slain protesters is a 17-year-old girl, Nataly Aroquipa, who was reportedly shot in the abdomen.

“At nine o’clock at night on January 9, 2023, we recorded 17 deaths in Juliaca, and one further death due to events related to the road blockade in Chucuito, Puno. The total number dead since the coup is now at 46,” Defensoría del Pueblo, the national ombudsman’s office, said on Twitter. In addition to the deaths, at least 500 protesters have been injured, according to officials.

Local media report one Peruvian National Police officer, identified as Sonco Quispe José Luis, was burned to death in his patrol vehicle during a protest, and two pistols and a rifle were stolen from his car.

State forces killed at least 17 in Juliaca, Peru yesterday (and 45 in a month). The silence by the international community is unforgivable. Unfortunately, as we saw in Bolivia in 2019, the world ignores when #indigenous people are massacred. pic.twitter.com/AOEggFjgbI

Puno Gov. Richard Hancco Soncco on Tuesday declared three days of official mourning in honor of those killed in Juliaca, while rejecting “any act of violence and the exaggerated use of public force by the Peruvian National Police and the Peruvian Armed Forces.”

The killings happened on the seventh day of a national strike. Protesters—who Anahí Durand, Castillo’s minister for women and vulnerable populations, said are “the excluded, marginalized, informal, rural, and Indigenous”—are demanding Boluarte’s resignation, the closure of Congress, immediate elections, and a new constitution.

Peru’s National Coordinator for Human Rights (CNDDHH) condemned the killings and asserted that “Boluarte and her ministers” are “responsible for the massacre in Juliaca.”

Marta Hurtado, a spokesperson for the United Nations Office of the High Commissioner for Human Rights, on Tuesday called on “security forces to comply with human rights standards and ensure that force is only used when strictly necessary, and, if so, in full compliance with the principles of legality, precaution, and proportionality.”

🇵🇪#Peru: Grave concern at rising violence after 17 people killed on 9 Jan in one of deadliest days since protests started in Dec. We urge prompt & effective investigations & protection of the rights to freedom of expression & peaceful assembly: https://t.co/MKA2mXaatR pic.twitter.com/FBGdYaTkZH

Hurtado, who also asked protesters to “show restraint,” urged Peruvian authorities to “carry out prompt, impartial, and effective investigations into the deaths and injuries, holding those responsible to account and ensuring victims receive access to justice and redress.”

Speaking Monday evening in a televised address, Peruvian Prime Minister Alberto Otárola defended the actions of state security forces. Otárola declared that “we will not cease in our defense of the rule of the law,” while blaming the violence on groups backed by “foreign interests and the dark money of drug trafficking” who want to “destroy the country.”

While condemning the “seizure of airports, aggression against other people—including law enforcement—preventing the movement of ambulances, and all forms of attack on public or private property” perpetrated by some protesters, the national ombudsman reminded police and military forces of their “duty to comply with current regulations and international standards on the use of force.”

Peruvians across the country are rallying at their local police stations and shouting ‘murderers’ at the regime forces. This is in response to the massacre today in Juliaca in which 13 protesters were killed.

This video is from the city of Arequipa. pic.twitter.com/H55uEEVS3g

The current protests began following the December 7 overthrow and arrest of Castillo—a democratically elected former rural teacher and union organizer—by the country’s right-wing-controlled Congress after he moved to dissolve the legislature in a bid to preempt a move to dismiss him for “permanent moral incapacity.”

Incensed by Castillo’s promise of sweeping social reforms and a new constitution, Peru’s oligarchs and the National Society of Industries, the country’s leading business group, had long sought his removal.

On December 16, a judicial panel of Peru’s Supreme Court of Justice ordered Castillo imprisoned for 18 months while prosecutors investigate charges of rebellion and conspiracy against the former Peruvian president.

The future of Indigenous Decolonization and plurinationality is happening in Peru. All eyes on Peru! Peru suyuman musirinanchis, masiykuna! 4/ pic.twitter.com/9qgXxxG2oh

While there is no evidence of direct U.S. involvement in Castillo’s ouster, the ex-president sounded the alarm over a meeting held the day before his removal at the Government Palace in Lima between Boluarte and U.S. Ambassador Lisa Kenna, a former longtime CIA agent appointed by then-President Donald Trump.

The United States has a long history of supporting right-wing dictatorships in the region. During the 1970s and ’80s, successive U.S. administrations backed “Operation Condor,” a coordinated effort by right-wing military dictatorships in Chile, Argentina, Uruguay, Bolivia, Paraguay, Brazil, and, later, Peru and Ecuador in which around 60,000 leftists were killed and tens of thousands others arrested and tortured.