“States are stepping up to make billionaires pay their fair share, and it’s time for Congress to take action too,” said U.S. Sen. Elizabeth Warren. 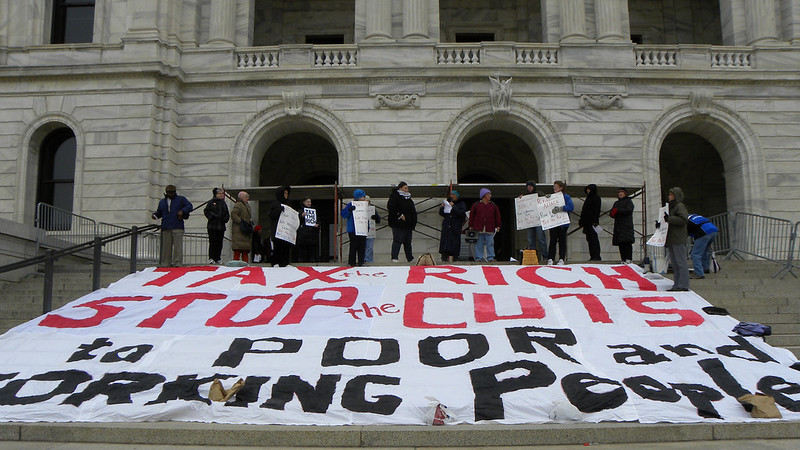 Frustrated with federal inaction in the face of soaring inequality, Democratic lawmakers in seven states across the U.S. are teaming up this week to simultaneously introduce wealth tax bills targeting the fortunes of billionaires and other rich individuals who have seen their net worth explode in recent years.

Officially launching on Thursday, the first-of-its-kind effort is led by state lawmakers in California, Connecticut, Illinois, Hawaii, Maryland, New York, and Washington—collectively home to around 60% of the country’s wealth.

“If the federal government won’t act, we the states will,” said Alex Lee, a California assemblymember who will join several other state lawmakers at a press conference on Thursday.

According to The Washington Post, which got an early look at the text of the coming legislation, “some of the state bills resemble the ‘wealth tax’ that Sen. Elizabeth Warren (D-Mass.) pitched during her 2020 presidential candidacy.”

Emmanuel Saez, a prominent Berkeley economist who helped craft Warren’s plan, had a hand in the wealth tax proposals that will be unveiled this week by lawmakers in California, New York, and Washington who are taking aim at the assets—not just the incomes—of the mega-rich.

“In four states—the three that drafted bills with Saez’s involvement, along with Illinois—lawmakers say they will float versions of a tax on wealthy people’s holdings, or so-called ‘mark-to-market’ taxes on their unrealized capital gains,” the Post reported Tuesday. “Connecticut, Hawaii, Maryland, and New York lawmakers, meanwhile, are proposing a change based on some Democrats’ frustration with national tax policy. The federal government taxes capital gains—the income that a person makes from selling a stock or similar asset—at a separate rate from other income.”

The slate of bills set to be introduced Thursday also includes proposed changes to state-level estate taxes, including a Maryland plan to lower the exemption cutoff from the current level of $5 million to $1 million.

An analysis released Tuesday by the Patriotic Millionaires and other progressive advocacy groups found that there are nearly 1.5 million individuals in the U.S. with a net worth of $5 million or more.

The groups estimated that a federal “wealth tax of 2% on millionaires with wealth over $5 million, 3% on those with wealth above $50 million, and 5% on American billionaires would raise $583.5 billion annually,” enough revenue to “increase education spending by 47.3%.”

In a tweet on Wednesday, Warren wrote that “the majority of Americans agree: it’s time for a wealth tax on the ultra-rich in America.”

“States are stepping up to make billionaires pay their fair share, and it’s time for Congress to take action too,” Warren added.

The majority of Americans agree: it’s time for a wealth tax on the ultra-rich in America. States are stepping up to make billionaires pay their fair share, and it’s time for Congress to take action too.https://t.co/RtsoeGjkg8

The state lawmakers’ wealth tax campaign was coordinated by SiX Action—an arm of the State Innovation Exchange—and the State Revenue Alliance. In a press release on Wednesday, the coalition said the new initiative “demonstrates that state legislatures are leading the charge in enacting transformational policies on key issues of the day, including tax justice—particularly in light of a split Congress.”

But the Democratic lawmakers’ approach stands in marked contrast to the tax policies that Republican legislators are currently pursuing—and have already enacted—at both the state and federal levels.

As researchers at the Institute on Taxation and Economic Policy (ITEP) wrote Tuesday, “one-third of the 41 states with income taxes have opted for a flat rate,” a regressive tax structure that “guarantees that wealthy families’ total state and local tax bill will be a lower share of their income than that paid by families of more modest means.”

Republicans in the U.S. House, meanwhile, are pushing extreme legislation that would abolish the Internal Revenue Service and replace federal income taxes with a highly regressive national consumption tax.

“The bill is a tax cut for the wealthy and a tax hike on working people,” the progressive advocacy group Americans for Tax Fairness said Wednesday. “MAGA Republicans don’t have the power to make this law now, but they’re playing the long game for a tax code that tilts even more in favor of the rich and corporations. Their far-right tactics show us their attacks on working people won’t stop, they’ll only get more aggressive.”