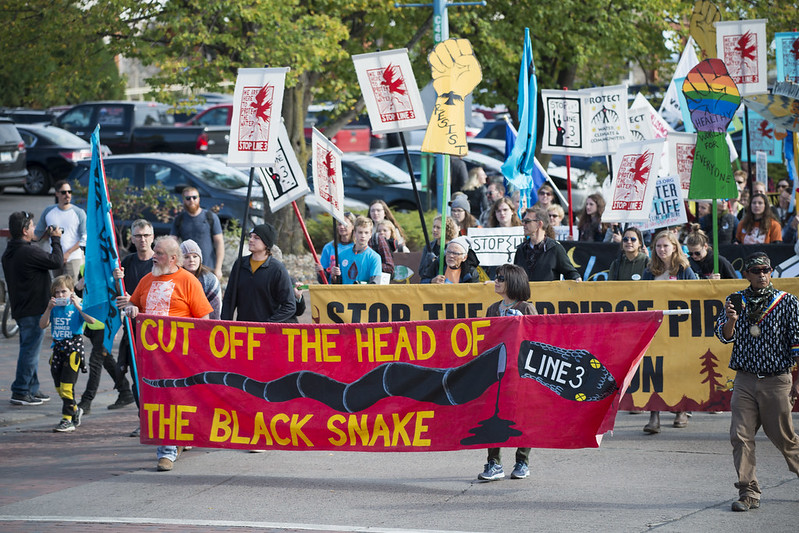 Issued by Judge Brian Morris of the District of Montana, the ruling ripped President Donald Trump’s State Department for blithely tossing out “prior factual findings related to climate change” to rush through the Keystone pipeline and using “outdated information” on the severe threat the tar sands project poses to endangered species, tribal lands, and the water supply. END_OF_DOCUMENT_TOKEN_TO_BE_REPLACED

At a deed-signing ceremony earlier this week, farmers Art and Helen Tanderup transferred to the tribe a 1.6-acre plot of land that falls on Ponca “Trail of Tears.” END_OF_DOCUMENT_TOKEN_TO_BE_REPLACED

On Monday afternoon, TransCanada announced that it had asked the State Department to suspend its permit application review process for the Keystone XL pipeline project. The request was made in a letter to Secretary of State john Kerry,

TransCanada had faced multiple lawsuits in Nebraska over the pipeline’s route through the state and over who in the state had final authority to grant final approval on that route. Back in September, TransCanada dropped ongoing lawsuits against Nebraska landowners and agreed to submit a review proposal to Nebraska’s Public Service Commission.

In the letter, the company noted that that the review is expected to take seven to 12 months, and went on to say:

“In order to allow time for certainty regarding the Nebraska route, TransCanada requests that the State Department pause in its review of the Presidential Permit application for Keystone XL. This will allow a decision on the permit to be made later based on certainty with respect to the route of the pipeline.”

“We are asking State to pause its review of Keystone XL based on the fact that we have applied to the Nebraska Public Service Commission for approval of its preferred route in the state. I note that when the status of the Nebraska pipeline route was challenged last year, the State Department found it appropriate to suspend its review until that dispute was resolved. We feel under the current circumstances a similar suspension would be appropriate.”

Opponents to the pipeline pointed out that the pipeline’s route wouldn’t ultimately alter the pipeline’s effect. Tom Steyer said that instead of granting a delay, the Obama administration should “immediately reject” the pipeline.

“Clearly TransCanada has lost and they recognize that. It’s one of the great victories for this movement in decades. In defeat, TransCanada is asking for extra time from the referees, and clearly hoping they’ll get a new head official after the election. It’s time for the current umpire, President Obama, to reject this project once and for all, and go to Paris as the first world leader to stop a major project because of its effect on the climate.”

Personally, we really don’t think it makes much difference at this point. The collapse of the oil market has pretty much made Keystone XL an unprofitable venture for the foreseeable future. As long as oil is trading for under $80 or $90 a barrel, there’s no profit in refining tar sands oil. Yesterday, the one year forecast for WTI crude was $53 a barrel.

Our destiny is in our hands. 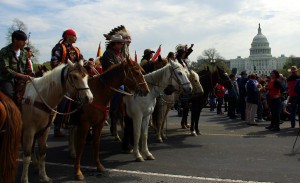 On Tuesday, April 22, the Cowboy and Indian Alliance rode into Washington, DC, and set up their teepees on the mall for a week-long protest of the Keystone XL Pipeline project. Affiliates from Bold Nebraska, landowners, ranchers, Native Americans from several tribes and concerned citizens joined the entourage. The event’s schedule can be found on Bold Nebraska’s website.

In a story dated April 23rd, Rolling Stone Magazine stated that inside sources at the White House revealed that President Obama has indicated he plans to reject the controversial pipeline. While many may breath a sigh of relief upon reading the report, Occupy World Writes is cautiously optimistic that the administration will follow through, and will not relent our appeal to reject this project until an official announcement has been made. 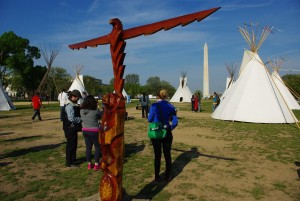 As a freshman senator campaigning for president in May of 2008, Barack Obama made a stop on the Crow Indian Reservation in southern Montana, where he became part of a new family. Hartford and Mary Black Eagle formally adopted Obama as their son during a private traditional Native American ceremony, giving him a new name – Barack Black Eagle – and making him an honorary member of the tribe.

In the history of treaties, agreements and understandings between the American government and Native Americans, the government has a clear track record of disregard and breaking their word whenever conditions would favor them. As a result, Native Americans have acted with great restraint in most all matters, holding their part of the bargain by honoring their sacred word. Perhaps Americans, as a culture, do not understand the significance of something “SACRED,” or perhaps they don’t think giving your word should mean anything now days.

We call on Barack Black Eagle to recognize the encampment on the Washington Mall and acknowledge the sacred concerns of the Native Americans and their contingent. We also think walking through the encampment with his family would allow Malia and Sasha a perspective unlike any other.