“This rally is about demanding that the German government break the deadlock of a climate policy that has failed to reduce carbon emissions for nearly a decade now, but it also is about showing governments everywhere that a growing climate movement is demanding an end to dirty and outdated fossil fuels.” 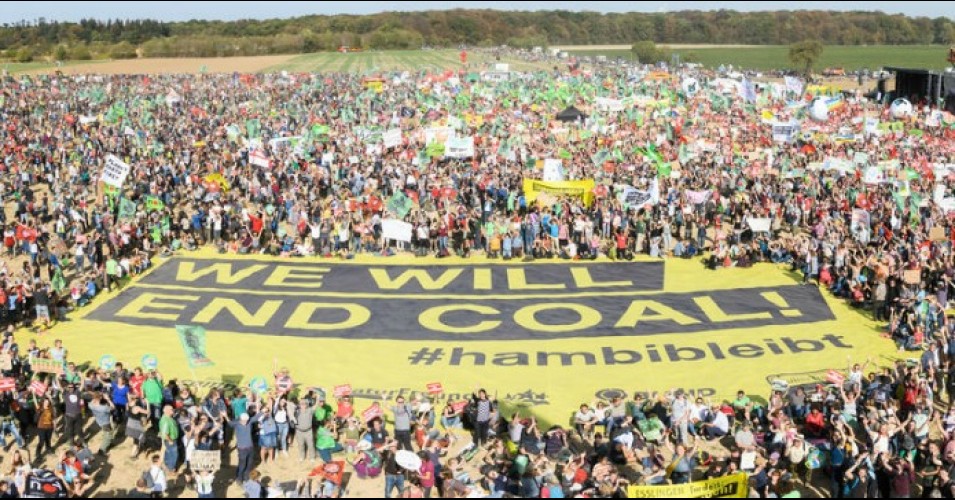 50 000 people participate in the demonstration at the Hambacher Wald near Koeln-Buir for a quick coal phase-out and for the rescue of the Hambacher Forest. The demonstration “Save forest-stop coal” near the forest is the largest of its kind so far. The initiative Buirer for Buir, the German Federal Association for the Environment and Nature Conservation (BUND), Campact, Greenpeace and the nature friends of Germany are calling for a fast exit from coal. They demand energy group RWE to definitively stop logging in the Hambach Forest. The banner reads: “We will end coal. #hambibleibt.” (Photo: Bernd Arnold/Greenpeace)

More than 50,000 people from across Europe gathered near the Hambacher Forest in western Germany on Saturday to defend the area from the expansion of coal-fired energy and demand much more ambitious climate action.

According to Greenpeace, one of the organizers behind the demonstration, the enormous crowd made up of local farmers, environmental activists, church groups, local residents and supporters from other countries, including Italy, France and the Netherlands. It was the largest-ever anti-coal demonstration in the Rhineland. END_OF_DOCUMENT_TOKEN_TO_BE_REPLACED