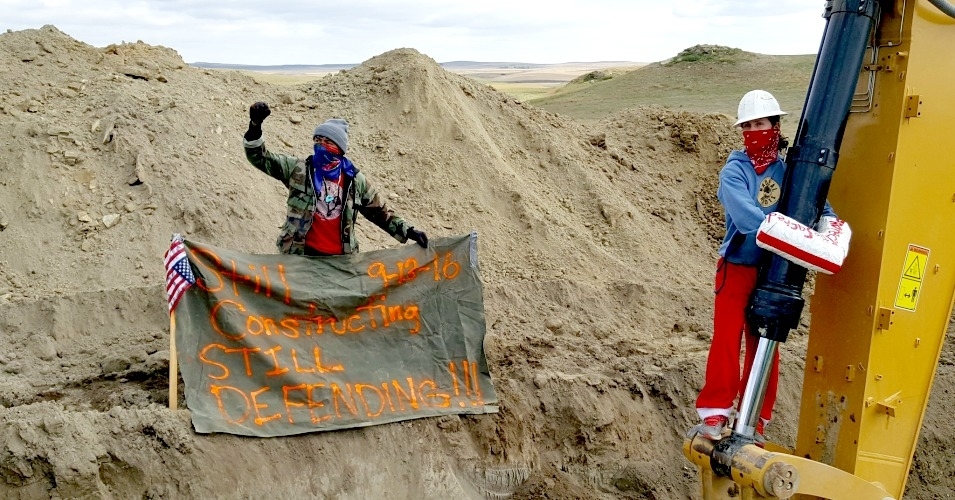 Peaceful water protectors were arrested by police in riot gear and brandishing machine guns, and then were charged with felonies—because they temporarily stopped construction of the Dakota Access Pipeline. (Photo: Unicorn Riot/Twitter)

Water protectors battling the notorious Dakota Access Pipeline in North Dakota are now facing felony charges for peaceful direct actions that halted construction at two sites on Tuesday and Wednesday—a sign that law enforcement appears to be escalating its response to the water protectors.

“They came at us from our backside, armed with semi-automatic weapons,” one water protecter reported as he was arrested Tuesday.

After two water protectors attached themselves to equipment outside of Mandan, North Dakota, Tuesday, putting a halt to construction, 20 people were arrested by police brandishing machine guns and in riot gear—including medics, journalists, and legal advisors. And an additional 22 people were reportedly arrested on Wednesday after three people repeated the same peaceful action at a second site west of Bismarck.

The Morton County Sheriff Department on Wednesday announced (pdf) the felony charges and increased misdemeanor charges for several of the 20 protecters arrested this week. The felony charges were for “reckless endangerment,” and were handed down to the two people who attached themselves to construction equipment on Tuesday.

The same county has also issued arrest warrants for Green Party presidential candidate Jill Stein, for partaking in the protests, and to Democracy Now‘s Amy Goodman for reporting on them.

“We are told it is our right to stand up if there is injustice in America,” said LaDonna Allard, Section 106 historic preservation officer for the Standing Rock Sioux Tribe, “but when we do we are attacked as North Dakota spend[s] its dollars to protect an oil company rather than protecting the people from destruction of their lands and water. Where is the justice?”

A man was also arrested Wednesday morning solely for transporting water protectors: “Officers say they saw the driver transporting protesters,” the local sheriff wrote in a memo. “During an inventory search of the vehicle, officers found paint and mechanisms protesters are using to attach themselves to construction equipment. Authorities have impounded the van.”

The driver was charged with “conspiracy to commit obstruction of a government function.”

Indeed, this week’s escalating arrests and felony charges demonstrates that public law enforcement are perhaps no less on the side of industry than the pipeline company’s own private security firm, which made headlines when it used attack dogs against peaceful water protecters last week, observers argue.

And it’s not only the local police who appear staunchly on the side of corporate power: the National Guard has also been operating a military checkpoint on the outskirts of the Standing Rock Sioux reservation, since North Dakota Gov. Jack Dalrymple activated the guard last week.

Construction on the pipeline is continuing on at least two sites in North Dakota, despite the Obama administration’s request that the pipeline company suspend activities.

Meanwhile, investigative journalist Steve Horn revealed this week that an industry front group appears to be engaged in a subversive social media attack against the water protectors.

Despite the onslaught against them, the Indigenous people and their allies remain undaunted in their fight.

“This was an absurd and overzealous usage of force by North Dakota law enforcement,” said Dallas Goldtooth of the Indigenous Environmental Network after Wednesday’s arrests. “Such blatant disregard for the safety and legal rights of unarmed water protectors should not and will not go unnoticed. And yet, this inappropriate behavior by police will not deter our peaceful struggle to stop this pipeline.”

“For far too long as Indigenous people, our rights, our water, and our land have been taken from us,” said one water protector who was filmed while attached to construction equipment on Wednesday. “And we’re not going to stand for it no more.”

“I know our ancestors are here with us, that they would want this to happen,” the protector added. “To everybody, everywhere: come stand with us. Let’s stop this pipeline. Together as a people, we can stop anything that we put our minds to—it’s a new day for Indigenous people.”