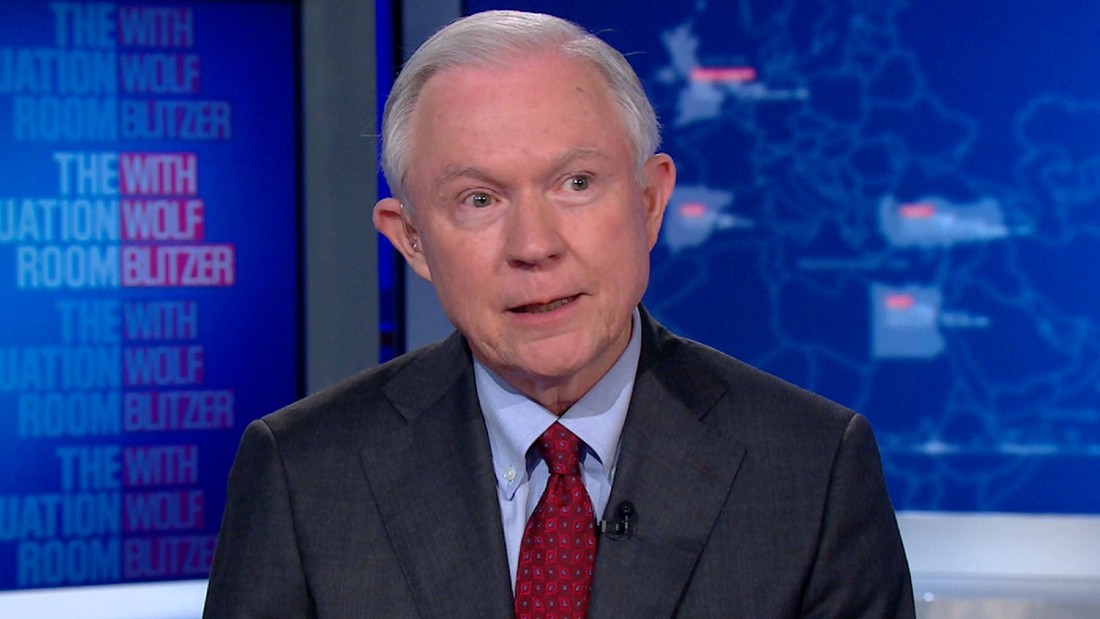 The move stalls the controversial confirmation of Sen. Jeff Sessions and came at the same time that Democrats on the Senate Finance Committee boycotted hearings for Treasury Secretary nominee Steven Mnuchin and Rep. Tom Price’s nomination to be secretary of health and human services, forcing Republicans to reschedule both votes.

At the same time that U.S. President Donald Trump made clear that whoever leads the U.S. Department of Justice would be forced to uphold the Rule of Trump over Rule of Law, Democrats and Republicans on the Senate Judiciary Committee on Tuesday held a tense debate over the pending confirmation of Jeff Sessions.

Tuesday’s hearing was held hours after acting AG Sally Yates was fired by Trump for refusing to enforce an immigration order she deemed unlawful. Ironically, during Yates’ 2015 deputy AG confirmation hearing, Sessions had specifically asked her: “If the views the President wants to execute are unlawful, should the attorney general or the deputy attorney general say no?”

Watch the exchange below:

But growing concern that Sessions himself would act as “rubber stamp” for Trump and his policies—as well as his record of opposing rights for women, minorities, and the LGBTQ community—were the basis of many questions during Tuesday’s committee hearing, and has sowed fear among those concerned over the troubling consolidation of power within the new administration.

Before voting against his confirmation, Sen. Patrick Leahy (D-Vt.) called out Sessions’ troubling devotion to Trump and noted that even Trump’s senior advisor Stephen Bannon called Sessions the “administration’s clearing house for policy and philosophy.”

That quote came from an email to Washington Post reporters Philip Rucker and Robert Costa, who on Monday declared Sessions the “intellectual godfather…of Trump’s hard-line actions.”

“The early days of the Trump presidency have rushed a nationalist agenda long on the fringes of American life into action—and Sessions, the quiet Alabam­ian who long cultivated those ideas as a Senate backbencher, has become a singular power in this new Washington,” they wrote:

From immigration and health care to national security and trade, Sessions is the intellectual godfather of the president’s policies. His reach extends throughout the White House, with his aides and allies accelerating the president’s most dramatic moves, including the ban on refugees and citizens from seven mostly Muslim nations that has triggered fear around the globe.

The author of many of Trump’s executive orders is senior policy adviser Stephen Miller, a Sessions confidant who was mentored by him and who spent the weekend overseeing the government’s implementation of the refu­gee ban. The tactician turning Trump’s agenda into law is deputy chief of staff Rick Dearborn, Sessions’s longtime chief of staff in the Senate. The mastermind behind Trump’s incendiary brand of populism is chief strategist Stephen K. Bannon, who, as chairman of the Breitbart website, promoted Sessions for years.

During Tuesday’s debate, Sen. Dianne Feinstein (D-Calif.) similarly pointed out that “Trump repeatedly referred to Sessions as ‘my Attorney General,'” to which she added: “How could we possibly conclude that this nominee will be independent?”

Indeed, ahead of the hearing, a coalition of progressive organizations had petitioned committee chairman Charles Grassley (R-Iowa) to delay the scheduled vote until Sessions clarified his stance on the temporary ban on citizens from seven predominantly Muslim countries.

The hearing was met with numerous disruptions from protesters, including from former U.S. Army colonel and CODEPINK activist Anne Wright, who was arrested after speaking out. 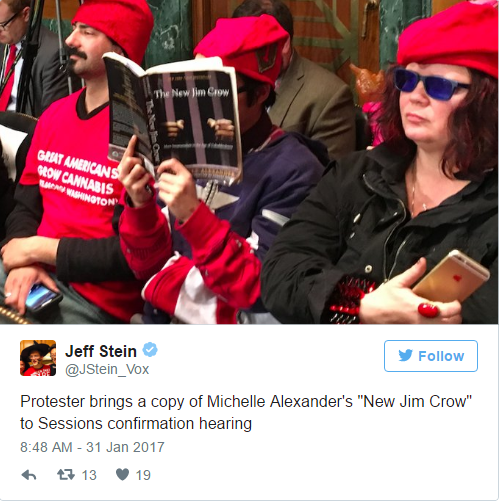 Meanwhile, outside the Dirksen Senate Office Building where the hearing was held, protesters rallied against Sessions and vowed retribution against lawmakers who backed his nomination. 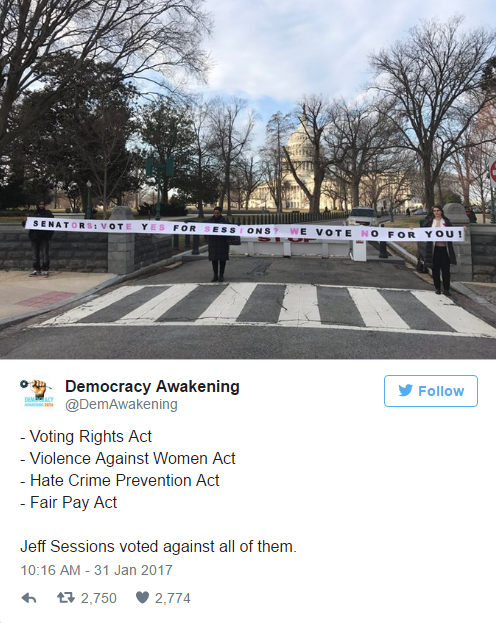 On Monday evening, 11 members of the NAACP, including the organization’s president Cornell Brooks were arrested for staging another sit-in outside Sessions’ Mobile, Alabama office.

“I think it’s clear that this administration is picking a fight with the American citizenry and the citizenry is making it clear that we’re not backing down; we’re not relenting,” Brooks said.

Widespread opposition to Trump’s cabinet, particularly Sessions, and anger over what many has perceived as lackluster resistance on the part of Democratic lawmakers has pushed many party leaders to preemptively announce they would not vote for his approval.

Senate Minority leader Chuck Schumer announced in a Facebook post on Monday that he would not vote for Sessions, among other nominees. Confronted by angry constituents, Sen. Sheldon Whitehouse late Sunday also said Sessions would not get his vote.