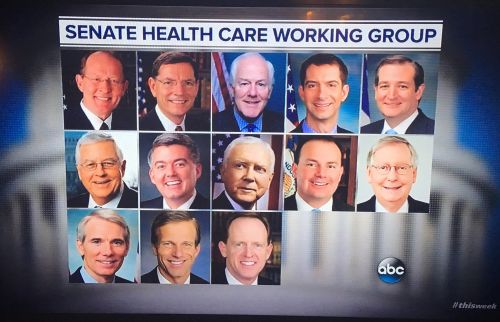 Explaining the reasoning behind the Senate’s lack of transparency, one of the aides remarked, “We aren’t stupid.”

Once the bill is complete, Axios‘s Caitlin Owens reported, it will be sent to the Congressional Budget Office (CBO) to be scored.

“It’ll take CBO about two weeks to evaluate and score a draft bill,” Owen added. “Senate Republicans then want to vote on the bill before the July 4th recess.”

On social media, commentators were swift in denouncing the move as hypocritical and undemocratic. Nate Silver of FiveThirtyEight observed, “Republicans know their health care bill is super unpopular and so are trying to shield it from public scrutiny.

Senate Republicans are writing a bill to remake 1/6th of the US economy & wont tell anyone what’s in it. Democracy! https://t.co/097NrbPtuh

RT if you agree: the Senate GOP’s decision to hide their health care plan is undemocratic, dangerous, and just plain wrong. https://t.co/CDXBiHDzNN

Before Axios’s reporting made clear the Republicans’ intentions to keep their deliberations secret, Sen. Claire McCaskill (D-Mo.) castigated her colleagues during a recent Senate Finance Committee meeting for keeping the Congress and the public out of the health care loop.

“We have no idea what’s being proposed,” McCaskill said. “There’s a group of guys in a back room somewhere that are making decisions.”

“Will there be a hearing on the health care proposal?” Senator @clairecmc asked today in the Finance Cmte. You should watch: #Trumpcare pic.twitter.com/rmKB0rGnTM

Andy Slavitt, who served as acting administrator of the Centers for Medicare and Medicaid Services from 2015 to 2017, also took aim at the GOP’s tactics in a Washington Post op-ed published over the weekend, accusing Senate Republicans of using “three tools” to ram through their wildly unpopular health care plan: “sabotage, speed, and secrecy.”

Slavitt noted that the architects of the health care plan face a vexing dilemma: “What to do with a bill that is clogging your agenda but only 8 percent of Americans want you to pass and members of your own caucus swore was dead on arrival?”

Instead of rewriting the bill from scratch and attempting to adopt measures that would make it less harmful—previous CBO estimates indicated that if the House version of TrumpCare were implemented, 23 million people would lose insurance—the Senate has instead decided to recede into the darkness, shielding their deliberations from criticism and keeping crucial information hidden from the public.

News that the Senate is planning to send their version of TrumpCare to the CBO without making it public comes as reports have indicated that “moderates” within the GOP who previously insisted that Obamacare’s Medicaid expansion be maintained are caving quickly under pressure from their fellow Republicans.

“How bad is the Senate health care bill likely to be?” the official Twitter account of House Ways and Means Committee Democrats wondered. “So bad that they can’t share it with the public, apparently.”