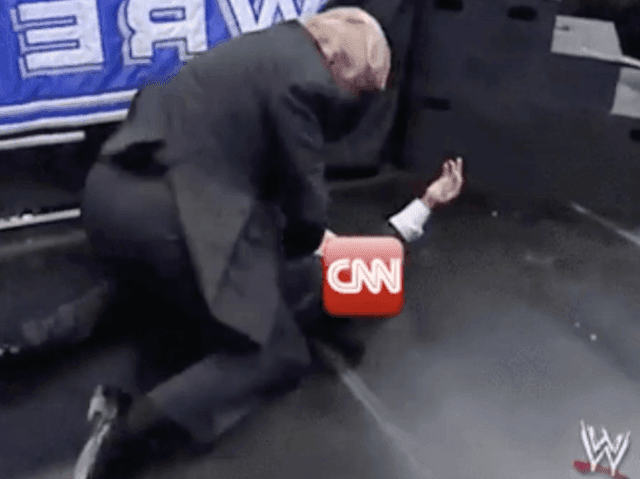 “It’s not just about labeling reports of his constant falsehoods as #FakeNews,” Swalwell added, “it’s his casting of media personalities and outlets as anti-American targets, and encouraging people to engage in violence.”

Since Trump took office, journalists and free press advocates have decried stunts that have underscored his hostility toward the news outlets and journalists who dare to report critically on his dishonesty and policies. Such stunts have included last month’s #FakeNewsAwards as well as Trump tweeting a video of him punching a wrestling promoter with the CNN logo edited over the promoter’s face.

“This is a dangerous time to be a journalist,” noted Bernie Lunzer, president of The NewsGuild, a division of the Communications Workers of America, the nation’s biggest labor union for media workers.

“The threatening atmosphere is palpable,” Lunzer added. “The Journalist Protection Act deserves the support of everyone who believes our democracy depends on a free and vibrant press.”

The bill would make it “a federal crime to intentionally cause bodily injury to a journalist affecting interstate or foreign commerce in the course of reporting or in a manner designed to intimidate him or her from newsgathering for a media organization,” according to a statement released Monday.

The News Media for Open Government, a coalition of news media and journalism organizations that work to promote freedom of the press, has also expressed support for the bill.

Rick Blum, the coalition’s director, pointed to recent online harassment of journalists, which “has included death threats and threats of sexual and other physical violence,” as well as the “dozens of physical assaults on journalists doing their jobs” that have been documented by the U.S. Press Freedom Tracker.

The tracker, launched last year, flagged more than 40 physical attacks of reporters in 2017, including two assaults by U.S. politicians. It also highlights broader threats, such as when a man allegedly made 22 threatening phone calls to CNN headquarters last month and, according to unsealed documents, shouted, “Fake news. I’m coming to gun you down,” claiming he planned to kill everyone on the premises.

“It is clear that not only is the role of the news media in our democracy under attack, but the safety of individual journalists is threatened,” Blum concluded. “It’s time to reverse course.”