“In a series of broken promises Trump made to the working people of this country, rejoining the job-killing Trans-Pacific Partnership would be the biggest yet,” warned Sen. Bernie Sanders 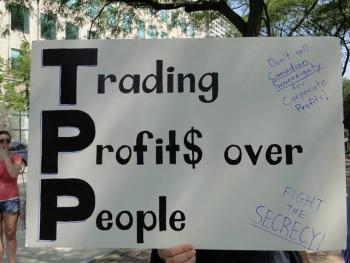 As if his enormous tax cuts for the rich, attacks on the safety net, and efforts to help bosses steal their employees’ tips weren’t proof enough, President Donald Trump further demonstrated that he “does not give a crap about working people” on Thursday by telling lawmakers he is considering rejoining the Trans-Pacific Partnership (TPP), a trade pact he withdrew from last year and repeatedly derided as “terrible.”

In a statement responding to the news that Trump has directed his top economic adviser Larry Kudlow and Trade Representative Robert Lighthizer to examine options for reentering the 11-nation accord, Lori Wallach of Public Citizen argued that the president’s move “could bring short term joy to Democratic campaign operatives” but would be yet another signal that Trump “cannot be trusted on anything.”

While Republicans like Sen. Ben Sasse (R-Neb.) were quick to celebrate the president’s step toward reentering an agreement analysts have said would reward corporations at the expense of workers and the environment, progressive lawmakers and union leaders decried Trump’s TPP directive as a potentially disastrous “step in the wrong direction.”

“In a series of broken promises Trump made to the working people of this country, rejoining the job-killing Trans-Pacific Partnership would be the biggest yet,” warned Sen. Bernie Sanders (I-Vt.) in a tweet on Thursday.

Sen. Elizabeth Warren (D-Mass.) also weighed in, calling Trump’s move “a ridiculous reversal and a slap in the face to the hard-working Americans Trump promised to fight for.”

.@realDonaldTrump has sworn up and down that he won’t support bad trade deals. He pulled out of the TPP after he was elected – but now he wants back in. It’s a ridiculous reversal & a slap in the face to the hard-working Americans Trump promised to fight for. TPP is a lousy deal. https://t.co/9hXka7WiN2

Negotiated under a veil of strictly-enforced secrecy by the Obama administration and so-called trade advisory committees stocked with corporate representatives, the TPP was never really even about establishing conditions for “free trade,” as numerous analysts have noted.

Rather, as The Intercept‘s Zaid Jilani argued, the pact is primarily aimed at “protecting corporate profits” by “crafting regulatory regimes that benefit certain industries.”

The deal—which was signed in March by 11 Asia-Pacific nations amid fierce grassroots opposition—is particularly generous to Big Pharma, as it “expands monopoly protections and patents for various pharmaceutical drugs,” Jilani observed.

Dean Baker, senior economist at the Center for Economic and Policy Research, concluded in a 2016 analysis that “the TPP is a deal about redistributing more income upward”