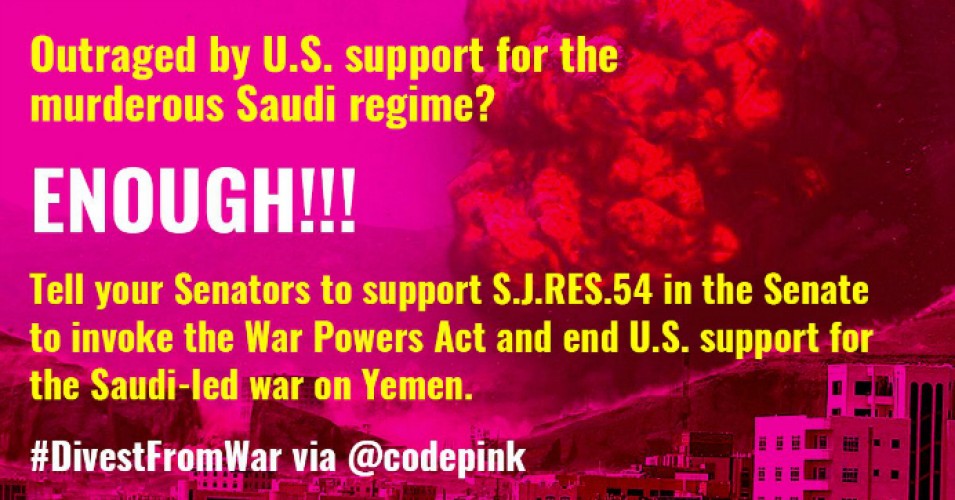 “The Saudi-led intervention in Yemen, with U.S. support, has killed thousands of civilians. Over 85,000 children have died of starvation. Enough is enough,” Sanders, who introduced the bill alongside Sens. Mike Lee (R-Utah) and Chris Murphy (D-Conn.), declared on Tuesday. “The Senate must vote to end U.S. support for this war.”

Our support for the Saudi-led bombing campaign in Yemen has created a humanitarian crisis. Call your Senators and tell them to support S.J. Res. 54, my bill with @SenSanders and @SenMikeLee to end U.S. involvement in the war in Yemen. pic.twitter.com/VDTHONaEpJ

On Twitter, Peace Action, CodePink, and other anti-war groups focused their pressure campaign on the Democratic senators who joined hands with a nearly unanimous GOP caucus in March to block Sanders’ measure, Senate Joint Resolution 54.

“It’s long past time to end U.S. support for Saudi Arabia’s devastating war in Yemen,” Peace Action wrote on Twitter. “Call your senators today at 202-224-3121 and ask them to support Senate Joint Resolution 54 to end the unauthorized U.S. role in the war.”

.@SenDougJones, please vote yes on #SJRes54 to end US military support for the Saudi-led war in #Yemen. US support is fueling the worst famine in 100 yrs, undermining our security, & was never approved by Congress. #YemenCantWait #JusticeForJamal https://t.co/6s6iTpTZN3

Though Sanders’ resolution failed by an 11-vote margin earlier this year, the Saudi kingdom’s gruesome murder of journalist Jamal Khashoggi has intensified scrutiny on the decades-long U.S.-Saudi relationship and sparked hope among peace groups that senators could switch their votes this time around. Sen. Bob Menendez (D-N.J.), who voted against the measure in March, said on Monday that he would support the resolution when it reaches the floor.

From the ongoing war in #Yemen to the gruesome murder of #JamalKhashoggi, U.S. support for Saudi Arabia must end. Tell Congress to invoke the War Powers Act. Vote yes on S.J.RES.54. https://t.co/uOdkYagyIT via @codepink

“Given President Trump’s defiant and erratic statements defending Saudi Arabia and refusing to take any meaningful steps to hold the Saudi government accountable for the murder of journalist Jamal Khashoggi, urgent congressional action is needed to force Trump’s hand and use our best leverage with the Saudi government by ending all U.S. military involvement in the Yemen war,” MoveOn campaign director Iram Ali and Indivisible associate policy director Elizabeth Beavers said in a statement on Monday.

“Over the past three years, the U.S.-Saudi war has triggered the world’s worst humanitarian crisis and threatens to starve to death 14 million people—half of Yemen’s population,” Beavers  and Ali said. “We call on Leader Chuck Schumer to follow Pelosi’s lead and cosponsor the measure. We also demand that all Senate Democrats vote in support of S.J.Res. 54 to help avert a famine of an increasingly horrific magnitude that would leave 14 million on the brink of famine.”

Editors’ note: Meanwhile, the Senate has a closed door briefing about the murder of Jamal Khashoggi. Who isn’t the Trump administration allowing to brief the Senate? Gina Haspel, the head of the CIA, who’s actually traveled to Turkey to hear the evidence provided by the Turks.