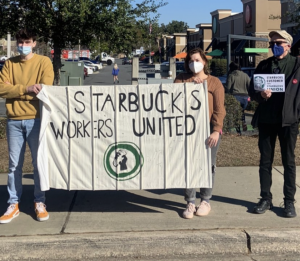 Will got a job at Starbucks nearly a year ago, and was one of nearly 50 people from the Buffalo New York region – as part of Starbucks Workers United – to sign a letter in August asking then-CEO Kevin Johnson to support a fair union election.

“Instead what they did was send almost 200 managers from all across the country to Buffalo for 20 stores,” added Will. “That meant watching us on the floor, scheduling us for anti-union meetings, pulling people into the back of the store to either interrogate or get information on them to use in future group meetings. Really just waging a psychological war on their own employees.”

But the workers kept organising, with legal assistance from Workers United, an arm of the Service Employees International Union. As Will remarked: “It’s kind of like the rest is history.”

In December, the Starbucks Buffalo Elmwood Avenue branch unionised, becoming the first Starbucks to do so in the US. Will’s branch, Camp Road, is currently having its votes contested by Starbucks Workers United because of what it says were unfair labor practices by Starbucks during the ballot.

Since the Buffalo victory, 250 Starbucks locations in over 30 states have filed for votes with the National Labor Relations Board (NLRB). As of this week, 39 stores have voted to unionise. (This is likely higher by the time you’re reading this.)

In March, Howard Schultz, National Labor Relations Board (NLRB)the chain’s billionaire founder, returned from retirement to take over as CEO. If anything, he has likely just further inflamed the situation.

As has been widely reported, Starbucks is continuing to wage an aggressive anti-union campaign with frequent so-called “captive-audience” meetings, in which workers have to attend anti-union lectures led by management; firings; and threats of shutting down stores. (This week the NLRB sued Starbucks for retaliating against three employees involved in forming a union.)

But it’s not just Starbucks.

Earlier this month, Amazon workers in Staten Island voted to form the company’s first US union. (Amazon already has a unionised workforce in countries such as Italy, France, Spain and Germany.)

The effort was organised by the independent and worker-run Amazon Labor Union (ALU) led by Christian Smalls. Smalls, a 33-year-old former Amazon supervisor, led a protest in March 2020 outside the warehouse in response to what workers said were inadequate COVID measures taken by Amazon. Smalls was subsequently fired. (Amazon claims it was for violating social distancing rules; New York State attorney general Tish James has charged Amazon with unlawfully firing him.)

And like Starbucks workers, the ALU faced a fierce anti-union campaign. According to Department of Labor filings, Amazon spent $4.3m on union-busting consultants – many of whom reportedly led captive-audience meetings and promoted anti-union propaganda. They also led an apparent smear campaign against Smalls. The Amazon general counsel reportedly described him as “not smart or articulate”.

ALU on the other hand, only spent $120,000 raised through a GoFundMe page.

“We’re both real worker-led movements that have been able to achieve success in the face of millions of dollars spent on legal fees and intimidation tactics by these behemoth multi-billion-dollar companies,” said Will, reflecting on the connection between Starbucks and the Amazon Labor Union. “This year really has been the moment for workers to democratise our workplaces, and respond to the vast amounts of inequality exacerbated in the last ten or 20 years.”

Now, as some of these strikes are gaining momentum, media attention, and the support of high-profile, more progressive members of Congress, is the US experiencing the beginning of a resurgent mass labor movement? And how can the federal government support this organising?

“What’s happening is working-class people, fuelled by inflation, the pandemic and a shortage of people to do these jobs, are much more confident and not willing to just take whatever is thrown at them,” Larry Cohen, the former president of the Communications Workers of America and chair of the progressive grassroots organisation, Our Revolution, told me this week.

The pandemic, and the government’s response, has also affected workers’ power within the labor market. The COVID fiscal packages (which included enhanced unemployment insurance, stimulus checks, the child tax credit, and the suspension of student loans) alleviated some of the financial burdens on workers. As some economists have argued, this sustained consumer demand, coupled with the health and care impacts of COVID (getting sick, caring for children, older people retiring) that reduced the supply of workers, has given them more power and leverage.

This has also happened amid inflation – and the rising costs of food, housing, gas, and utilities – while the bosses have been getting richer and richer. Over the course of the pandemic, billionaire wealth has skyrocketed. For example, Jeff Bezos is now currently worth an estimated $164bn, up from $113bn in 2020.

“Too many people right now in the country aren’t getting enough from these companies that are bringing billions of dollars to the top,” said Will.

This wealth inequality is nothing new. It is the culmination of a 40-year assault on union membership in the country. Currently only about 1 in 10 workers are part of a union, down from three times that figure in the 1950s. This was all part of a neoliberal agenda and the decimation of labor.

One of the central turning points in the attack on labor came in 1981 when president Ronald Reagan fired more than 11,000 air traffic controllers – and encouraged private sector employers to follow suit. As Jon Schwarz at The Intercept noted: in 1980 there were 187 strikes. By 1988, that number had dropped to 40.

Now, the US has one of the lowest union membership rates of any OECD country. The UK has a union rate of 23.5%, while in Denmark and Sweden nearly two-thirds of workers are in a union.

But that doesn’t mean that unions aren’t popular. During the pandemic, public opinion ofn unions has reached its highest point since 1965, with 68% of Americans approving of labor unions. And it’s even higher among younger people, with 77% of people aged 18 to 34 supporting unions.

“For us, it’s about being able to have a voice in the place that we work. And to do so without fear of retaliation,” said Will from Starbucks Workers United.

Last Sunday, Bernie Sanders and Alexandria Ocasio-Cortez attended an ALU rally in Staten Island ahead of an election to unionise an Amazon sorting centre known as LDJ5. Sanders then flew down to Virginia to attend a Starbucks Workers Union rally.

Sanders pressured President Joe Biden to do more to support unionising efforts across the country. “To his credit, Biden has talked more about unions than any other president in my lifetime. But talk is not enough,” Sanders told the Staten Island crowd.

The Biden administration has taken some active steps in supporting the labor movement. Chief amongst these is the appointment of Jennifer Abruzzo as general counsel of the National Labor Relations Board. In December, Abruzzo settled with Amazon to allow workers to organise inside their facilities – which was essential to the unionising effort.

“She and her team tower above their predecessors,” Cohen told me. “She used every hammer she had and got a settlement with Amazon on some of the organzing rights issues. Amazing settlement.” Abruzzo has been denounced in the Wall Street Journal as “extreme, even compared with the radical Obama NLRB.” Many on the Left consider that the highest praise.

However, real labor reform in the US will require structural and legislative action. “It’s the rules, not just the rulers,” said Cohen.

The Protecting the Right to Organize Act – which passed the House in March 2021 but is now dead in the evenly divided Senate – would have been a great start. The act would have expanded organising protections by implementing measures such as outlawing employer interference in union elections and establishing monetary penalties for companies that violate workers’ rights.

Congress could also simply increase the budget for the NLRB. This week a group of 149 House Democrats called for Congress to allocate more funding to the board to address staffing shortages and adopt electronic voting systems to conduct union elections (which is currently barred). It remains to be seen whether they have the votes to pass this.

Given the current inability to pass any major partisan legislative priorities (even a modest climate package) through both chambers of Congress, what can Biden do through executive authority?

The administration could follow its own guidance in a Worker Organizing Task Force report released several months ago, and “leverage the federal government’s purchasing and spending power to support workers who are organising and pro-worker employers”.

Earlier this week, Sanders called on Biden to do so by preventing companies engaged in “illegal anti-union activities from receiving federal contracts paid for by US taxpayers” such as Amazon. Amazon has billions of dollars worth of contracts with the federal government, including a $10bn cloud computing contract with the National Security Agency.

However, it could be a challenge to prove anti-union activities in court. “It’s not simple given the federal judiciary and its assumption of legislative and executive power,” said Cohen, reflecting on the typically anti-worker slant of the US courts.

Supporting this diverse and galvanised labor movement ultimately requires a political system that establishes a real floor to protect workers organising and bargaining rights. And right now, the main way to build that is to harness the power of democracy in the streets, workplaces and political bodies. Young, diverse and working-class workers are leading the way.

“We got to the point where workers are organising themselves,” Smalls said at the Staten Island rally on Sunday. “And it’s not just at Amazon – we’ve got emails from [workers at] Walmart, Target, Dollar General, Apple. We are going to take over the country… This is the revolution.”