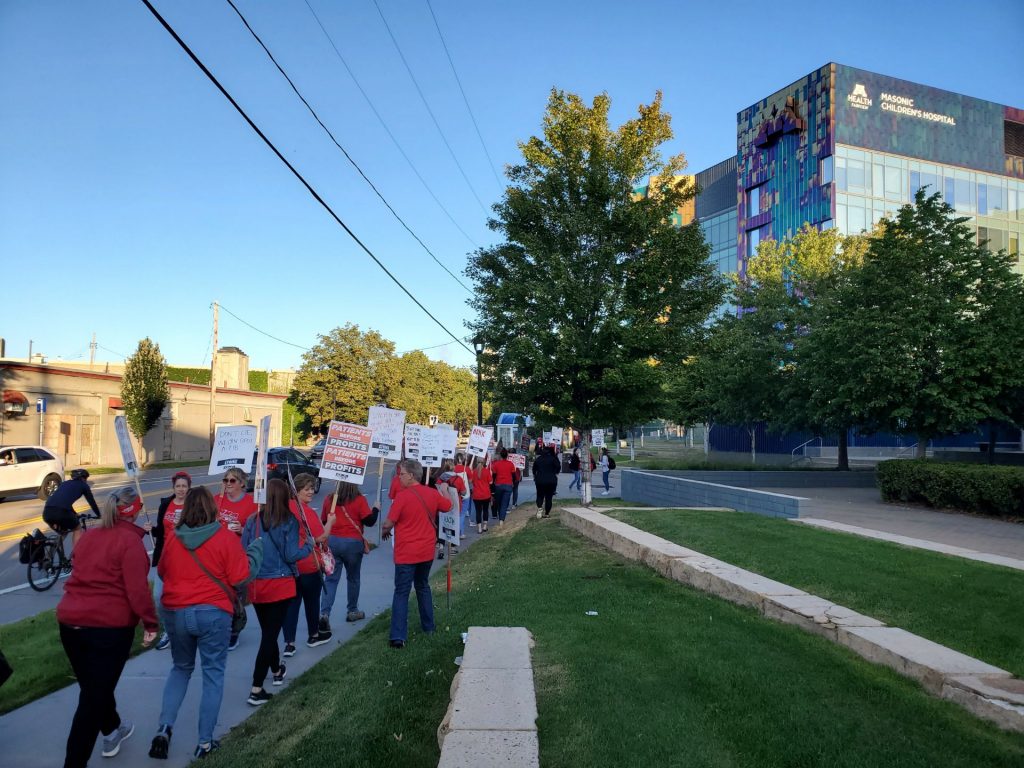 Nurses with MNA argue that hospital executives who make millions of dollars per year “refuse solutions to short-staffing, retention, and better patient care.”

Strikers carried signs highlighting their frustration. Messages included: “Patients before profits,” “Put an end to corporate healthcare,” and “The frontline is fed up with excuses!”

Chris Rubesch, MNA vice president and a nurse at Essentia Health in Duluth, told The Washington Post that “I can’t give my patients the care they deserve.”

“Call lights go unanswered. Patients should only be waiting for a few seconds or minutes if they’ve soiled themselves or their oxygen came unplugged or they need to go to the bathroom, but that can take 10 minutes or more,” he explained. “Those are things that can’t wait.”

Solidarity with the courageous @mnnurses taking a strong stand for their patients today and the future of quality, safe patient care #unionstrong https://t.co/jBHeaN4TSi

Minnesota Reformer reports that in addition to demanding staffing fixes and more paid sick and parental leave, nurses seek a “30% wage increases over the next three years. Hospitals have countered with around 10% increases over three years and say they can’t afford to go any higher.”

The outlet noted that “nurses at Essentia Health’s Moose Lake Clinic, who have been negotiating a first contract for two years, were also set to strike but decided on Sunday night to hold an informational picket instead.”

At the 15 hospitals in the Twin Cities and Twin Ports where nurses did strike on Monday, participants and supporters shared updates on social media.

Proud to stand with @mnnurses this morning on the picket lines! Our nurses deserve to be safe and respected on the job! pic.twitter.com/J8AoT9tbee

Nurses are vital to our health care system. They deserve a voice on the job, safety, and fair compensation. pic.twitter.com/2R7efDa4Sr

“I’ll be out standing in solidarity with our nurses at Abbott, Children’s, and Fairview today!” said Congresswoman Ilhan Omar (D-Minn.), who represents metropolitan Minneapolis. “Come join us and show your support.”

Backing their fight for “safer care, fair scheduling, and higher wages,” U.S. Sen. Bernie Sanders (I-Vt.). tweeted that “nurses are the backbone of our healthcare system. They understand what’s best for their patients.”

Spokespeople for Allina Health and Twin Cities Hospital Group, two of the systems where workers walked out, blamed the nurses for the impacts of the strike, pointing out to the Post that they have refused to go to mediation. But striking nurses say the walkout was forced by intractable management.

“We’re really sad and disappointed that it has come to a strike,” Brianna Hnath, a nurse at North Memorial in Robbinsdale, told the newspaper. “But we feel like this is the only thing we can do to show administration how incredibly important a strong nursing core is to a hospital. Hospitals tell us it’s our fault, but we’ve been actively involved and getting nowhere.”