“Billionaires represent 0.000002% of the American population, but they’re responsible for 7.4% of all political donations so far this cycle,” according to Americans for Tax Fairness. 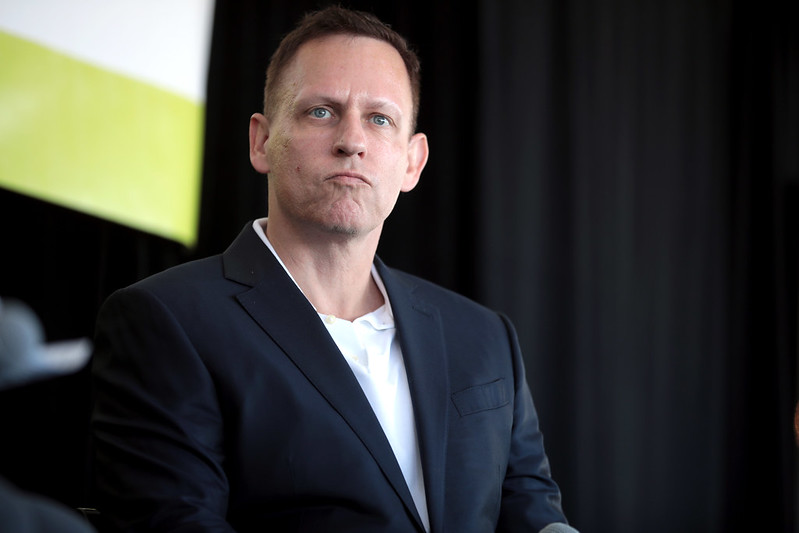 Peter Thiel speaking with attendees at the 2022 Converge Tech Summit at The Waste Management Phoenix Open at the Skybar at TPC Scottsdale in Scottsdale, Arizona. Photo: Gage Skidmore/flickr/CC

With under a week until the U.S. midterm elections, Americans for Tax Fairness revealed Thursday that billionaires have poured hundreds of millions of dollars into campaigns this cycle, largely to benefit Republican candidates.

“A torrent of billionaire cash is drowning our democracy,” declared Frank Clemente, executive director of Americans for Tax Fairness (ATF). “Money talks when it comes to influencing candidates and winning elections, and the loudest voices by far are billionaires pushing for lower taxes so they can accumulate even greater wealth and have even more power and influence.”

Based on an analysis of Federal Election Commission (FEC) data from OpenSecrets, ATF found that through the end of September, “465 American billionaires have pumped over $881 million into federal midterm races,” with the top 20 donor households giving 73% of the contributions, or collectively more than $643 million.

Putting that into a national context, ATF tweeted that “billionaires represent 0.000002% of the American population, but they’re responsible for 7.4% of all political donations so far this cycle.”

3/4 of that $881 million is coming from just 20 billionaire households.

And 59% of it is going to Republican PACs and candidates.

The group’s report highlights how unprecedented the findings are, explaining that “$881 million was already a 44% increase in billionaire contributions over the entire 2018 midterm cycle, which totaled $611 million based on an earlier ATF analysis.”

Reflecting the GOP’s enthusiasm for tax cuts that benefit wealthy individuals and corporations, ATF found that “by a 3 to 2 margin, more billionaire cash is supporting Republicans (59%) than Democrats (39%),” with most of the remaining 2% going to super political action committees (PACs)—which can collect unlimited contributions from donors—for backers of cryptocurrency and Israel.

The takeaways align with Bloomberg reporting, which detailed Thursday:

Citadel’s Ken Griffin, Blackstone Inc. chief executive officer Steve Schwarzman, and Oracle Corp. founder Larry Ellison are among the billionaire Republican donors who have rapidly scaled up their political contributions this midterm election cycle, boosting the odds of a divided Washington for the next two years.

The three men, worth a collective $150 billion, are among the 12 top political donors ahead of the elections, according to the most recent data from OpenSecrets. Of that dozen, 10 are backing Republicans in a big way: They’ve spent a cumulative $338 million, up 250% from the 2018 cycle.

“If you look at the people who are giving on the Republican side—Griffin and Schwarzman and the others—they’re all historically Republican donors,” David Tamasi, a founding partner at Chartwell Strategy Group, told Bloomberg. “It’s not like this is their first rodeo with giving. It’s just got more weight behind it.”

According to the ATF report:

There has been an explosion this election cycle of fundraising for super PACs created to support a single candidate. Donations to such single-candidate super PACs have risen from $127.5 million in the 2018 midterm cycle to $323.2 million on November 1, 2022—a 150% increase.

This cycle Republican candidates are benefitting from roughly 75% of all single-candidate super-PAC spending. The funding for these PACs often come almost exclusively from billionaires.

Some of the PACs spotlighted in the report are for GOP candidates in key U.S. Senate races:

Those races—along with closely watched contests in Arizona, Nevada, and Pennsylvania—will help determine the makeup of the currently split Senate, in which Democratic Vice President Kamala Harris officially breaks tie votes but the filibuster gives Republicans an effective veto over most bills.

Republicans are also working to take control of the House of Representatives, which is now narrowly held by Democrats, for the final two years of President Joe Biden’s first term.

“If even one chamber flips that is appealing to a certain number of donors who are not looking forward to having one-party control,” Ken Gross, a former FEC counsel now at law firm Akin Gump, told Bloomberg. “They are just as happy to have a stalemate and no legislation action.”

The richest man in PA, Jeffrey Yass, has managed to avoid $1 billion in taxes in recent years.

Is it any wonder he puts his millions toward electing those who are committed to cutting taxes for billionaires and stopping the IRS from auditing the rich?https://t.co/cGfIKO4o02

The ATF report notes that “more than a quarter ($243 million) of the billionaire contributions have gone to the four congressional super PACs of the House and Senate leadership of both political parties. The two GOP PACs have vacuumed up three-quarters (75%), or $181 million, in contributions. Most of this money is being spent on TV ads attacking opponents.”

As congressional candidates, along with those running for key state positions that could influence future elections, have campaigned this cycle on former President Donald Trump’s “Big Lie” that he won in 2020, Biden has framed the midterms as a crucial opportunity to safeguard U.S. democracy from MAGA extremists—a message he stressed in a Wednesday night speech.

“Make no mistake—democracy is on the ballot for us all,” Biden warned. “You have the power. It’s your choice. It’s your decision. The fate of the nation, the fate of the soul of America, lies where it always does: with the people—in your hands, in your heart, and your ballot.”