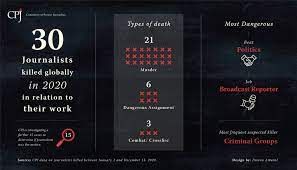 CPJ’s annual report contains a database of 30 journalists who were killed in 15 countries during the course of the year. Of these, six died while working “dangerous assignments,” three were caught in the crossfire during the ongoing Syrian civil war, and 21 were murdered. END_OF_DOCUMENT_TOKEN_TO_BE_REPLACED