While men can be seen hanging around, women are expected to have a purpose for being outdoors. This question must be addressed. 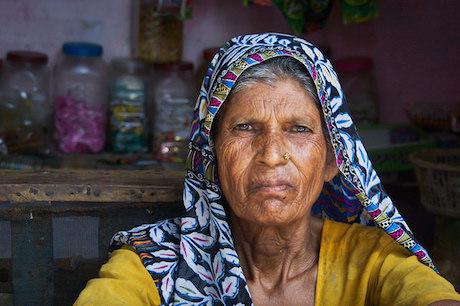 A woman sits in front of her shop near Aligarh. Evonne/Flickr. Some rights reserved.

Every time I go back to Aligarh, my hometown in India, I see a new eating spot. McDonald’s, KFC, Domino’s and Café Coffee Day are very recent additions to the city. Aligarh, pretty much like Oxford and Cambridge, is primarily a university city although it is also known for lock making and some handicrafts. When I went to the Women’s College, Aligarh Muslim University for my Bachelor’s almost a decade ago, I hung out mostly at the canteens in the college and university and went for lunch to local restaurants. The big city offerings of coffee, fried chicken and burgers were not around then (the closest we got to international cuisine was spicy chowmein which was probably more Indian than Chinese); those were the temptations of Delhi, the metropolis nearest to us.

On reflection, this transition from the local South Indian to American fried chicken in a small Indian city is symptomatic of wider economic, social and political changes in the country. With the country adopting neoliberal policies in the 1990s, the landscape of India changed – rapid urbanisation was touted as ‘success’ of neoliberalism. As the government projects the development of 100 smart cities in India by 2020 (incidentally, Aligarh is on that list), it is worth thinking about who belongs in these ‘world-class’ urban areas of the country.

The question of women in public spaces in urban India has been looming large for a few years now, particularly since the infamous gang rape of a young student in Delhi in December 2012. The brutal rape and murder of Jyoti Pandey was largely seen in the international media as a rupture in the narrative of India’s development and global economy – a country where women are not safe to go to the cinema couldn’t claim to be modern. 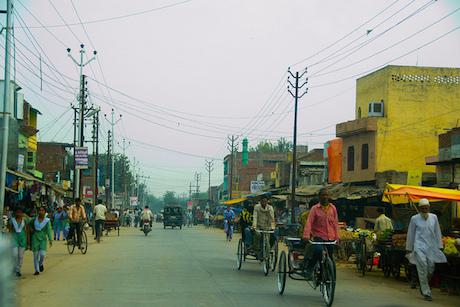 This issue of access to public spaces quickly became one of women’s safety – a formulation that the academics Shilpa Phadke, Sameera Khan and Shilpa Ranade find problematic. They argue for women’s right to risk and access in the city in their book ‘Why Loiter’. They encourage women to ‘loiter’ – while men can be seen hanging around in public spaces, women are expected (and restricted through the expectation) to have a purpose for accessing the same public spaces. The associated campaign ‘Why Loiter’ has been receiving photos from women trying out purposeless loitering to reclaim their right to public spaces.

In Aligarh, while women frequent CCD, Domino’s and KFC, they are not commonly found in the dhabas lining Shamshad Market or in Café de Phoos, spots which are popular with men students in the university. In all my years in Aligarh, I had only heard and watched men spending their leisure time drinkingchai, eating parathas and debating at these places. So, when a few of us decided to go out ‘loitering’ in Aligarh, it was obvious that our target would be the street side dhabas and cafes on the campus rather than the new coffee and burger joints. 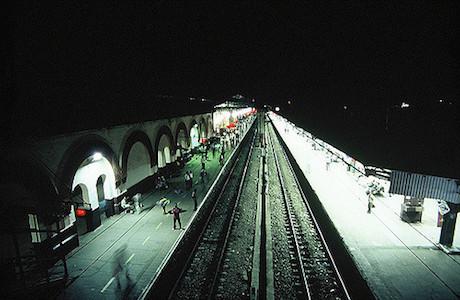 This situation is not so dissimilar to bigger cities and metropolises in India where plenty of women will be seen in shopping malls and cafes but frowned upon if seen hanging out in a neighbourhood corner. This invisibility of women from ‘local’ places (the borders are of course permeable and present an interesting study in themselves) might seem to be contradictory to women’s increased presence in shopping malls, cafes and restaurants but I would argue that the two go hand in hand. While the new spaces of consumption – malls, cafes, restaurants – pose as spaces of freedom and permissibility for women, they create segregations along class lines. There are only certain women – middle and upper class women – who are able to fully access these spaces, excluding the majority of women living in India’s cities, making it apparent that India’s world-class cities belong to those with economic power.

This exclusionary sense of freedom offered to women in Indian cities – the neoliberal ‘choice’ – is dangerous and needs to be challenged through reclaiming public spaces that still remain out of bounds for majority of women. Going a step further, the issue of equal access for women needs to conceive of spaces as not just physical but also temporal – most women who have lived in university hostels in India will know that while not all public spaces are out of reach, certain times of the day definitely are. The campaign Pinjra Tod (Break the Hostel Locks) is challenging the sexist ‘curfew’ hours imposed on women’s hostels, criticising universities for infantilising women. Campaigns like this need to spread to claim equal access to physical and temporal spaces for allwomen in India. In Aligarh, I’d rather claim my right to enjoy a paratha at Café de Phoos rather than sip the neoliberal dream at Café Coffee Day.

Asiya is a Gates Cambridge Scholar at the University of Cambridge where she is doing a PhD in Sociology. Her research explores the formations of class and gender in urban India.