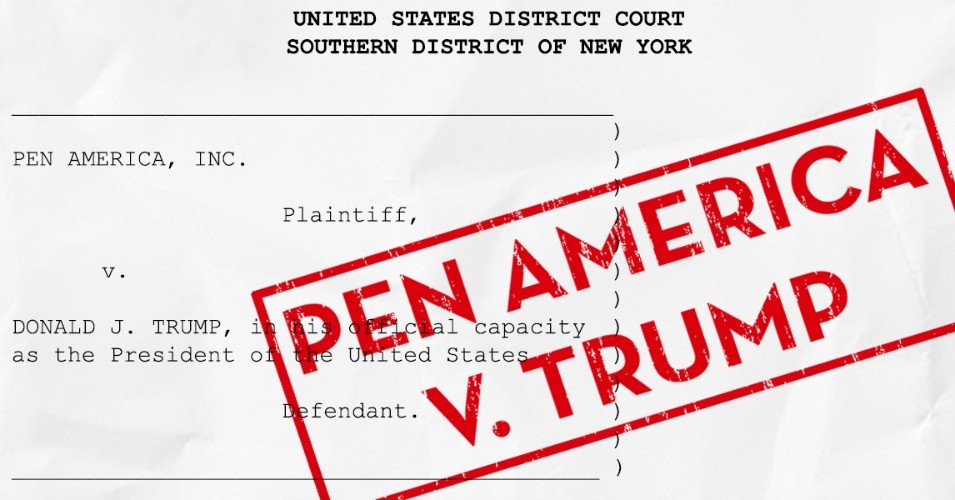 The lawsuit (pdf) brought in a Manhattan federal court on Tuesday—with PEN joined by the nonpartisan nonprofit Protect Democracy and the Yale Law School Media Freedom and Information Access Clinic—states that while Trump has constitutionally-protected rights and “is free to criticize the press vehemently,” the president “is not free to use the  power and authority of the United States government to punish and stifle it.”

Citing specific incidents in which Trump has moved to block business transactions of outlets or hinder the work of journalists he has denounced, Protect Democracy highlighted the following incidents:

“Trump’s anti-press actions are taking place at a time when autocrats around the world, including in Hungary, Poland, Saudi Arabia and Turkey, have been ramping up their attacks on a free press,” said Kristy Parker, an attorney representing Protect Democracy in the suit. “The difference between the United States and those countries is that the United States has a long-standing constitutional tradition that prevents such behavior and an independent court system designed to step in when violations occur.”

Jennifer Egan and Suzanne Nossel, PEN America’s president and chief executive officer respectively, said PEN America’s mission compels them to act and while Trump’s “tirades against the press are not new,” specific attacks on the free press must not go unchallenged.

“When President Trump crosses the line and threatens to use his authority to punish the media, or actually does so,” said Egan and Nossel in a public letter, “it is vital for the courts to step in and affirm that such threats and reprisals are unconstitutional. We have worked closely with leading First Amendment scholars and practitioners in private practice and academia in order to hone a request to the court to do just that.”

“We share PEN America’s grave concern about the President’s use of the levers of government power to retaliate against media companies for the content of their coverage.” @chrisfinan

Nossel, speaking with the Associated Press in an interview, said that beyond his spurious use of terms like “fake news” and “enemy of the people,” Trump has said and done numerous things to raise concerns that he is “actually extracting reprisals on the media for coverage he considers unfavorable” to him and his agenda.

According to AP, PEN is asking that Trump be enjoined from “directing or ordering any officer, employee, agency, or other agent or instrumentality of the United States government to take any action against any person or entity with intent to retaliate against, intimidate, or otherwise constrain speech critical of him or his Administration.”

The group is seeking no money beyond “costs, including attorneys’ fees,” and other “relief as the Court deems just and proper.”