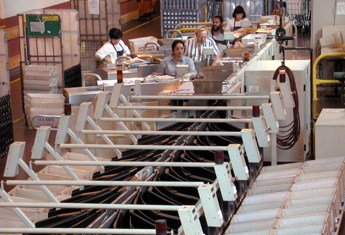 Asked by NPR‘s Noel King whether she has felt the impact of DeJoy’s changes, Iowa Postal Workers Union President Kimberly Karol—a 30-year Postal Service veteran—answered in the affirmative, saying “mail is beginning to pile up in our offices, and we’re seeing equipment being removed.”

Karol went on to specify that “equipment that we use to process mail for delivery”—including sorting machines—is being removed from Postal Service facilities in Iowa as DeJoy rushes ahead with policies that, according to critics, are sabotaging the Postal Service’s day-to-day operations less than 90 days before an election that could hinge on mail-in ballots.

“In Iowa, we are losing machines. And they already in Waterloo were losing one of those machines. So that also hinders our ability to process mail in the way that we had in the past,” added Karol, who said she is “not a fan” of the postmaster general. Washington state election officials have also raised concerns about the removal of mail sorting machines.

“I grew up in a culture of service, where every piece was to be delivered every day. And his policies, although they’ve only been in place for a few weeks, are now affecting the way that we do business and not allowing us to deliver every piece every day, as we’ve done in the past,” said Karol. “I don’t see this as cost-saving measures. I see this as a way to undermine the public confidence in the mail service. It’s not saving costs. We’re spending more time trying to implement these policy changes. And it’s, in our offices, costing more over time.”

Observers reacted with alarm to Karol’s comments, viewing them as further confirmation that DeJoy is deliberately attempting to damage the Postal Service with the goal of helping Trump win reelection in November.

Freelance journalist Erin Biba said there’s “absolutely no way to see” the removal of mail sorting machines from Post Offices as anything other than “sabotage” of the most popular government institution in the U.S.

According to internal Postal Service memos obtained by Reuters, DeJoy—a former logistics executive with tens of millions invested in USPS competitors—was aware his operational changes would lead to mail delays. As Reuters reported:

The reorganization, introduced in July, has resulted in thousands of delayed letters in southern Maine, as delivery drivers follow a new directive to leave on time, even if the mail has not been loaded.

Delays have also been reported in at least 18 other states, according to media reports.

“One aspect of these changes that may be difficult for employees is that—temporarily—we may see mail left behind or mail on the workroom floor or docks,” says one memo, dated July 10. The plan hopes to eliminate 64 million wosince January of this year.rking hours nationally to reduce personnel costs, according to another memo.

In a statement over the weekend, Rep. Peter DeFazio (D-Ore.) warned that Dejoy’s “nefarious collective efforts will suppress millions of mail-in ballots and threaten the voting rights of millions of Americans, setting the stage for breach of our Constitution.”

“It is imperative that we remove him from his post,” said DeFazio, “and immediately replace him with an experienced leader who is committed to sustaining a critical service for all Americans.”

Editors’ note: On wednesday, House Democrats introduced the Delivering for America Act, which would roll back any changes made to the USPS by DeJoy.