The Washington Post ran a story on Wednesday, “Occupy Wall Street just won.” With the 2016 Presidential campaign heating up, the article claims Occupy just won because the discussion of the 99% is the center of this election cycle.

Our victory is not new or recent; the media has refused to credit Occupy with the numerous conversations that began with the 2011 Occupy Movement. The public that didn’t pay attention then is realizing that what we were talking about had merit, and maybe they should have listened. 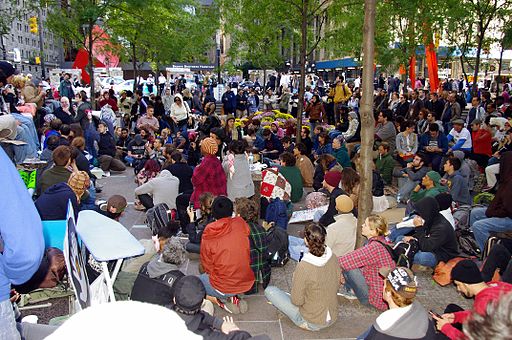 The media back in 2011 wanted to cover the Occupy story the same way they covered everything: show up, interview 4 to 8 people, shoot some film and head back to the office. They made the story about tents and parks, about homeless hippies and jobless layabouts. Instead of listening to what the real message was, they did the old reliable trick of pleasing the editors by finding the strangest, most unusual person and ask them questions until they can’t answer one with articulation, and that’s what makes the news.

My first visit to Occupy in 2011 was quite different than what the press told me I would find. There were college professors, doctors, lawyers, retired teachers, people from all walks of life. The conversations that were taking place were the most interesting. I wasn’t sure about Monsanto, and I didn’t know much about GMOs. I heard a lot about “People Over Profits,” Banks got bailed out, we got sold out,” “Who’s streets? Our streets!,” and a multitude of messages about wages, inequality, discrimination, corporate dominance, women’s rights and yes, even anti-war sentiments.

The heavy-handed response from local police in each encampment then became the focus of any news coverage. Gone were questions about why we were there, what we wanted, and why we felt change was mandatory. Any gaining public support was quickly destroyed with the media showing only the worst, not the good parts, of the fracturing camps. 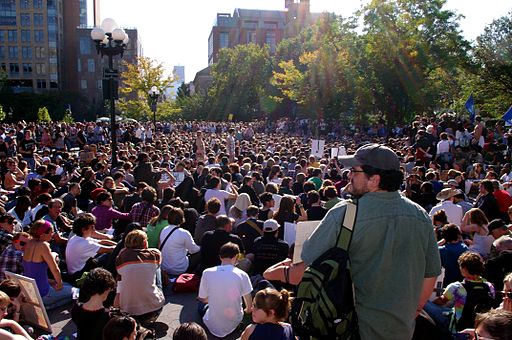 The Occupy Wall Street General Assembly meets in Washington Square Park for the first time on Saturday, October 8, 2011. Photo by David Shankbone (Own work) [CC BY 3.0], via Wikimedia Commons

Within the movement, we learned what the forefathers of this country learned over 239 years ago; Democracy is not easy. Many left the movement when the real work began. It wasn’t “fun” anymore. Others could no longer continue without losing their jobs. Still others, like the staff at Occupy World Writes, never quit. We never went “underground.” We forged on, with an occupation of our minds, and influenced conversations in our communities, our neighborhoods, our governments and even within some of our politicians.

We will never get the credit the Occupy Movement deserves for the millions of us that never quit. The media made sure of that (remember the media is corporate owned). The only way we could achieve our real goal was to not use the Occupy name with everything we did. But it never left our minds.

And what is the real message? That the conversation should never end. The fact that we let it during our generation is the very reason things are so messed up in the first place. If our children and grandchildren are to stand any chance at a life better than ours, and currently even as equal to ours, we are the ones that have to fix it. We need to say no to corporate greed and the erosion of human rights by governments around the world. We need to wake up, and stay awake, to the end of our watch.

It’s not over yet; I’m still Occupied.